The Historic Preservation Department protects and preserves the City of Savannah and Chatham County's historic resources through local zoning ordinances.

NOTICE: Per House Bill 493, detailed checklists of items are now required to be submitted with each development application. Additionally, there is now an affidavit at the end of the application and each checklist that must be signed, certifying that all required items are provided. This new process was adopted to help the review process for all types of development reviews in the state - for both the applicant and the reviewing body.

MAY IS NATIONAL PRESERVATION MONTH 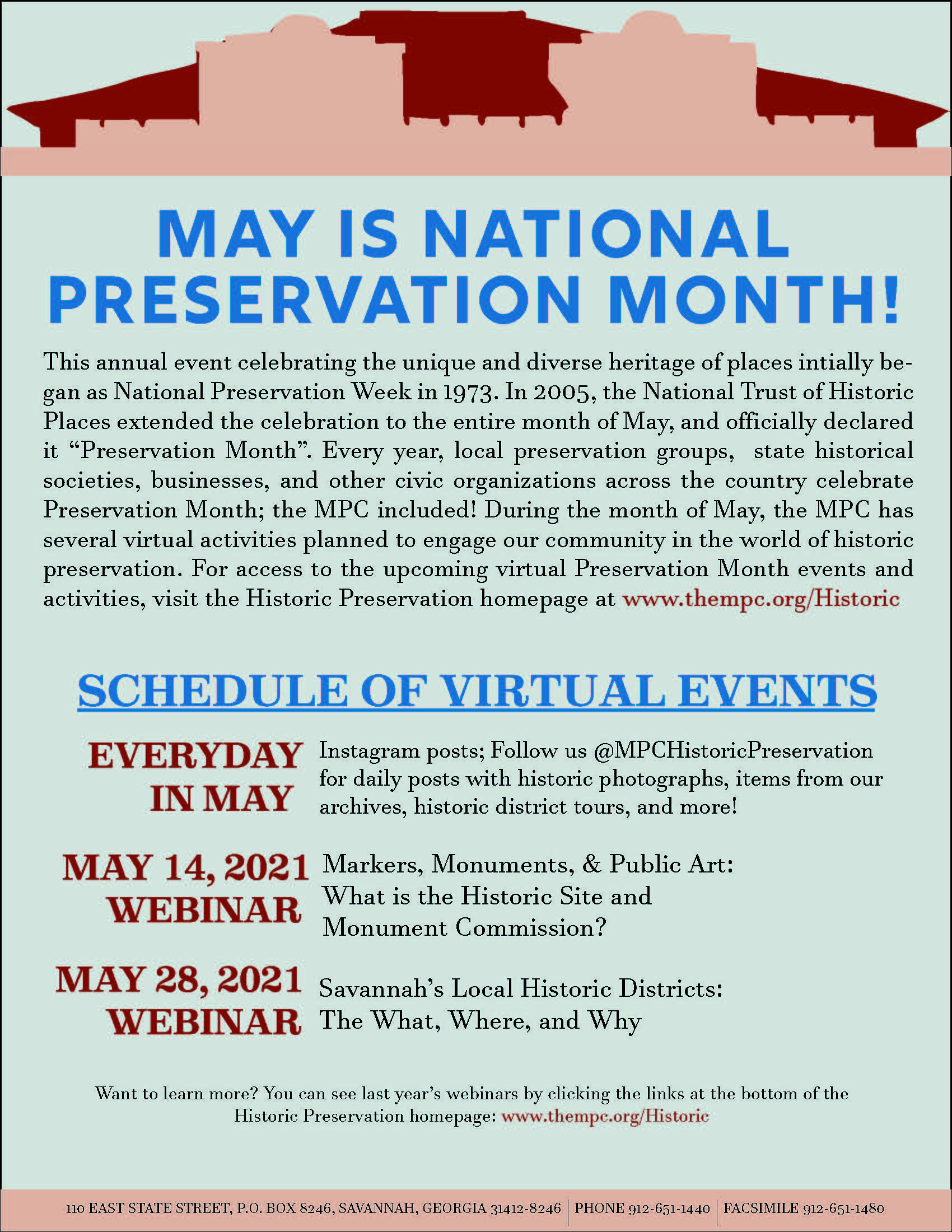 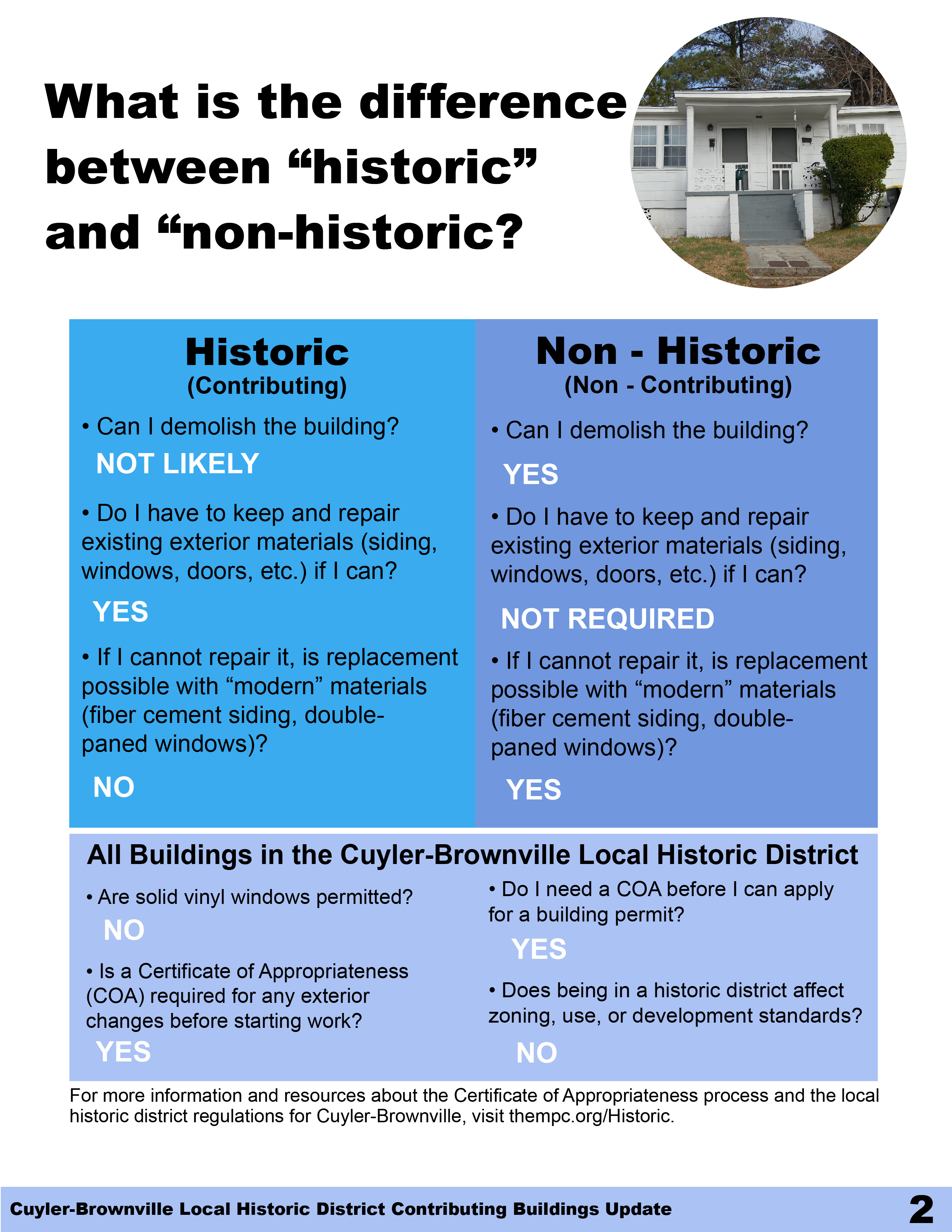 Between 2018 and 2020, an in-depth survey of the Cuyler-Brownville neighborhood was performed to identify buildings that were constructed between 1867 and 1938 and that contribute to the character of the area. Previous surveys have take place in the neighborhood, resulting in the 671 buildings that are currently listed as historic (also known as contributing). However, many buildings have been overlooked or left out in the past; 90 buildings have been identified and are proposed to be added as contributing to the Historic Buildings Map (See map). If you’d like to find out more, please attend the April 27th MPC Meeting at 1:30pm. This presentation will be at the end of the meeting. Use this link to register for our virtual meeting. Email Leah G. Michalak or call 912-651-1453 for more information. 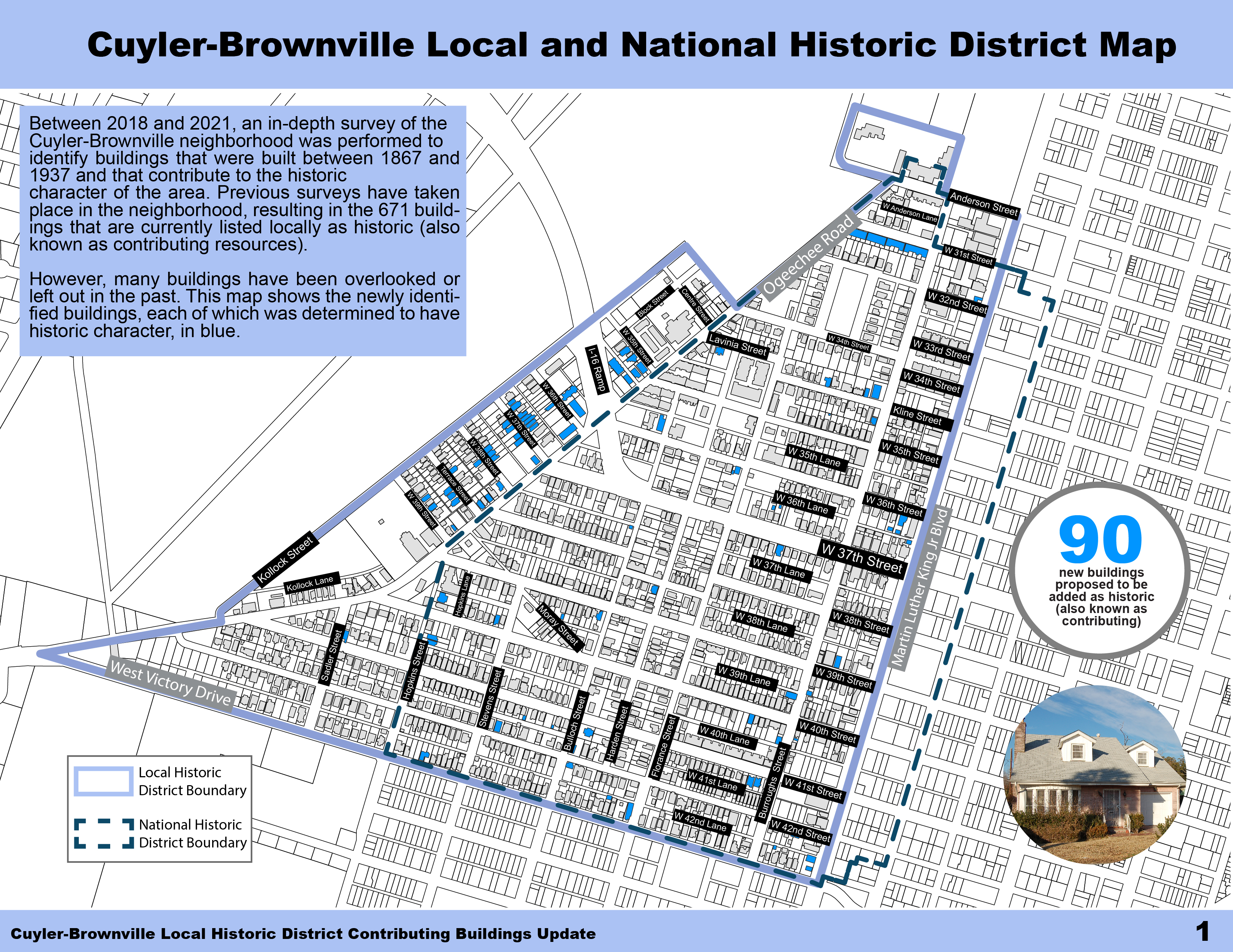 The Cuyler-Brownville neighborhood was originally developed in the mid-19th century for freed slaves and survives as one of the most intact and continuously occupied African-American neighborhoods in Savannah. Today, long-time residents continue to live in the Cuyler-Brownville neighborhood and maintain properties within the heart of the district. Their continued occupancy and maintenance have resulted in a high degree of historic integrity within the core of the district away from the busier commercial strip along Martin Luther King, Jr. Boulevard. The closely spaced and similarly shaped buildings along many block faces creates a continuous rhythm of structures and have established a street character that is not found elsewhere in Savannah.

The Cuyler-Brownville Neighborhood Historic Resources Survey was conducted as part of an ongoing city-wide preservation planning initiative sponsored by the City of Savannah, and administered by the Chatham County - Savannah Metropolitan Planning Commission. All phases of the survey were conducted jointly by Sarah Ward of Ward Architecture and Preservation and Robert A. Ciucevich of Quatrefoil Consulting. The survey identifies all historically significant buildings, structures, and sites within the Cuyler-Brownville Neighborhood and serves as an update to the 1994 historic resources survey of the neighborhood. The survey, which forms the basis for future preservation planning, was funded through a Certified Local Government (CLG) Survey and Planning Grant from the Historic Preservation Division of the Georgia Department of Natural Resources and matched in part by the City of Savannah and the Historic Savannah Foundation.

How to Apply for a COA: Applications and Checklists